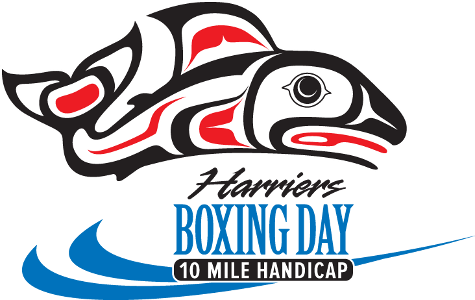 This amazing, staggered start handicap race where anyone can win often attracts an international field competing for fame and fortune.  2015 saw entrants from as far away as Courtenay BC, Richland WA and London England.  2016 had entrants from Toronto ON, Calgary AB and SE Asia.  2017 had entrants from up island, mainland BC, Washington state, Alberta and Ontario.  Ok, it's just people here for the holidays and some locals competing for quirky prizes and socializing at the Prairie Inn after, but it's a club tradition centred at our founding and namesake venue.  Oh, and it's free and almost everyone gets a prize!

There is a single lap 5-Mile option so let me know if you're interested in that.

There is also a concurrent dog-friendly social run / walk on the trails of nearby Mt Newton.

Always on December 26th, Boxing Day which in 2018 is a Wednesday.  Handicapped start times are determined by your best race performances within a time window of 24 to 8 months ago, favouring improving novices.  The idea being everyone should finish at about the same time.  First runners will start at about 10:00 a.m. and all runners should finish before noon.  Registrants will be informed of their exact handicapped starting time a few days prior to the race.  Those below from the last few years should give you an idea of the range:

*A cone may or may not be present on race day, as may signs each mile, and stick flags around the few corners.

The perfect tune-up for the Frontrunners Island Race Series! The only organized, accurate run at the classic 10-mile distance on the island (and the first since the Harriers Tower 10-miler in 1992). A chance to burn off some holiday flab. A socially stimulating brunch in the pub follows the run.

Maximum 60 registrations accepted - first come, first served. Please register online by December 25, giving your name, whether you ran an Vancouver Island Series race in the last 2 years, or your best times from fixed distance races between January 1st, last year and May 1st, this year, or failing any of those your estimated time for say 10km. No day-of-race entries accepted, but you can still show up day-of-race, run 5 or 10 miles socially, and join us for brunch.

None - it's a handicap race, the winner's the winner.

There will be limited food and/or fluid at the finish, possibly including water, mini oranges, candy canes, and leftover Christmas cookies. Be prepared by bringing your own refreshments / contributions and a change of clothes. The (family friendly) pub opens at 11:00. Whining is completely forbidden, and any suspected instance puts the whiner at risk of being assessed penalty minutes.

There may be a trophy or plaque for the winner. If so, it will be awarded immediately at the finish. There may also be random draw prizes of questionably useful items. Feel free to contribute re-giftings.

There will be one fluid stop, at the start/halfway/finish point. This also provides an opportunity to shed clothing at the half-way point.

Computer results may be posted on the internet the day of the race or in the days following.

Some results may be missing. This may or may not be rectified eventually. Just remember: no-frills race.

for the half broken, half trained, ...