Please join us on Friday, July 24th for our 10th annual golf tournament and auction to benefit Angel Foundation!

Held in memory of Paul Joern, the Tri 4 Your Cure Golf Classic was created to fulfill Paul's vision of helping others who have been affected by melanoma. Choosing to partner with Angel Foundation, Tri 4 Your Cure proceeds go toward Angel Foundation programs that benefit local adults living with melanoma and other forms of cancer. Over the years, Tri 4 Your Cure has raised more than $230,000 to support local families facing cancer.

Help make a difference! Join us at Deer Run Golf Club for a fun-filled day of golf to benefit Angel Foundaiton - you won't want to miss it!

Registration for four golfers. Due to social distancing, a tee time will be assigned. Includes boxed lunch.

Registration for one golfer. Due to social distancing, a tee time will be assigned. Includes boxed lunch. 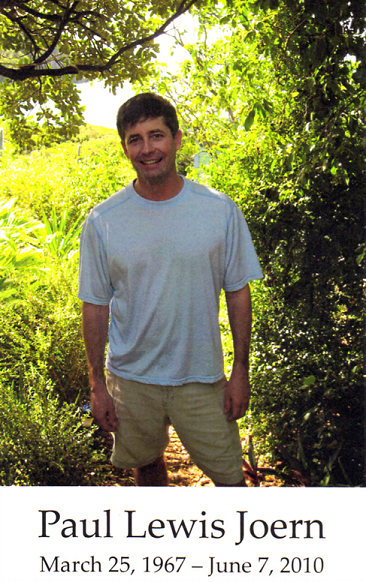 More than 450 people attended the funeral of Paul Lewis Joern, MD. Paul was 43 when his heroic two year struggle with melanoma came to an end. His loving family and lifelong friends from Edina, MN were there to honor him. His “college buddies” came to pay their respects along with the colleagues that he worked with on a daily basis. However, it was abundantly clear that Paul had touched the lives of hundreds and hundreds of people during his relatively short lifetime. Those in attendance were now discovering how far Paul Joern had spread his wings. We had the privilege of meeting people from Paul’s travels around the world (over 23 countries). We were introduced to the many associates from his real estate ventures (Paul purchased, remodeled, and sold three houses all while attending medical school). And we even got to know his Russian piano teacher. Because of his magnetic personality, the list goes on and on. Paul’s interests were certainly eclectic, and admirably, he befriended all whom he met along the way.

Some of Paul's friends called him Pauli. He was described as a fabulous friend, a prankster, a person with incredible personal energy, and a person with a great zest for life. He was fun to be around, a strong advocate for preserving the environment, and always ready for a party. Paul had tons of guy friends, and was often invited to parties where he was the only man. Paul loved to go to movies. Paul was a skinny guy who could hit a golf ball a mile. Paul loved boats and cars, he was fascinated by Buddhism as well as Christianity, he loved playing with children, and he was full of life.

At Paul's funeral while his mother Arlene was speaking, two birds flew through the sanctuary. Everyone present took this unusual symbol as a message from God. We all knew that Paul was finally in a place of peace. Prior to his death, Paul requested Robbie Robinson sing “Come Fly with Me” at his funeral.

Paul’s wish was that when he died, some money would be raised to support melanoma cancer research and to help support families of melanoma cancer patients who are faced with financial challenges from medical expenses. Paul dreamed up the Try-4 Your Cure Organization and we keep his dream alive by annually contributing funds to Angel Foundation in his name.