*processing fees apply* Team captain has already paid your entry fee. You must know your team name and password if applicable.

*processing fees apply* Team captain has already paid your entry fee. You must know your team name and password if applicable.

YOU ARE THE KEY FOR MANITOBANS LIVING WITH AN INTELLECTUAL DISABILITY!

In 1978, 11 people died in a tragic fire at the Portage Developmental Centre. The next year, John Robertson, a journalist on CBC-TV, resolved that it would never happen again. He inspired a small group of friends to take on the enormous concept of a new event – the Manitoba Marathon – to support Manitobans who live with an intellectual disability. And right from Day 1 in 1979, the participants in the Manitoba Marathon have made every mile count, by raising funds to build a better community.

John’s idea was a simple one. Get community organizations, volunteers, sponsors and the City of Winnipeg to put on a great event for runners, and in turn, ask every runner to make a personal donation or take their pledge sheet to their neighbours and friends, to support the Manitoba Marathon’s cause.

Since 1979, runners have done exactly that, raising over $5 million, to kick start over 500 projects across Manitoba. Hundreds of Manitobans have been freed from institutional care, and welcomed back into their communities. All thanks to the Manitoba Marathon – to runners like you – and the work of organizations like the Association for Community Living-Manitoba.

Did you know that over 200 people still live in the Portage Development Centre, an institution that houses people living with an intellectual disability? That’s over 200 people who deserve the same lifestyle you and I take for granted. Each one deserves to have a KEY to their own front door, just like you and me. 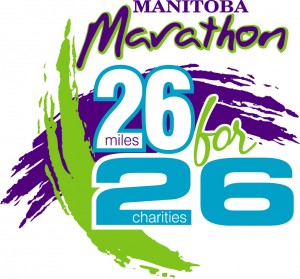 26 for 26 is a unique and exciting opportunity to use the largest mass participation event in Manitoba as a vehicle to fund raise. The Manitoba Marathon provides a sound, thriving, innovative fundraising vehicle, with a minimal partnership fee. Your charity can expect maximum return on your investment and feel confident teaming up with a cutting edge, world class, qualifying event. The result: a win-win partnership and rewarding fundraising experience without any strain on your expense budget.

To raise public awareness by encouraging people to participate in any one of our events while raising funds for one of our official Charity Partners.

Volunteers keep us running...and walking...and, depending how the day is going, sometimes crawling!

The Manitoba Marathon requires hundreds of volunteers to work in many different areas over race weekend: in the days before the race, during the race, and following the race.

Thank You for Volunteering!

We are always looking for new additions to our Sponsor Family!

Please call the Manitoba Marathon office at (204) 415-4517 and we would be delighted to discuss ways that you might get involved in our annual Celebration of Fitness, Family, and Fundraising!