Join us for the 2nd Annual Race to Equality 5K, 10K, Half Marathon & 54 Mile Challenge to bring awareness to racial inequality while raising funds to support scholarships to the African American community.

This year we’ve added a Selma to Montgomery 54-mile march. On March 7th, 1965, John Lewis and Hosea Williams set out from Selma to Montgomery with 600 protesters protesting the death of Jimmie Lee Jackson. March 7th would be forever known as “Bloody Sunday”. The marchers were turned away and beaten at the Edmund Pettis Bridge. On March 9th, Martin Luther King, Jr. led more than 2000 marchers across the same bridge, only to be turned away at Highway 80 by state troopers. Six days later President Lyndon B Johnson addressed the nation in a televised address pledging his support to the Selma protesters, calling for the passage of a new voting rights bill. On March 21st, 2000 people set out from Selma to Montgomery, protected by US Army Troops and the National Guard. The marchers walked for 12 hours a day, sleeping in fields, finally reaching Montgomery on March 25th.

Join us as we virtually honor this historic 54-mile march. Click here for more information on this historic march and its significance in American History.

Each runner or walker will receive an official Race to Equality finishers’ technical shirt, a 4’ medal, a BUFF (great to use as a mask when needed), and a SWAG Bag. 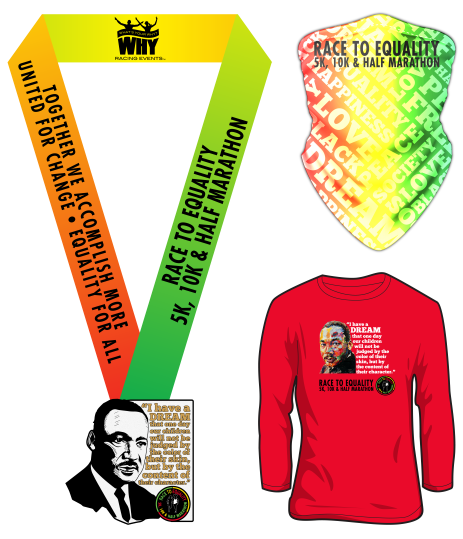 In addition, $10 from each entry will be donated to https://www.portlandlinksinc.org/ to support education and provide scholarships to local young adults of color.

The cost will be $55 and $10 will be donated to the Portland Chapter of Links to support Portland and Vancouver youth. If 1000 people register, we will donate $10,000.

Overall and age group awards will be provided to top finishers and all runners/walkers will receive a finishers’ certificate.

Date: Race distance must be completed by February 28th.