We are REALLY excited for this one. It's our biggest, craziest, and funnest (not a real word but you get the point) virtual challenge yet. Also, if you are into race medals, you'll love this! All of the participants will receive 2 unique medals for this event and one of them even has a flashing LED light! This race kit might just be the coolest of all of our virtual events yet! Like I said, we're REALLY excited. Over the past few months, we've had participants run into space and over the pyramids, now, we're running the largest lake system in the world: The Great Lakes!

So, what is a nautical mile?

A nautical mile is a unit of measurement that is used in air, space, and marine navigation. It is equivalent to 1.15 statute miles or 1852m (1.852km). This unit of measurement is used by all nations for air and sea travel. A nautical mile is based on the circumference of the earth. Imagine viewing Earth from directly above the Equator. Earth's circumference (going through North Pole and South Pole) would form a circle, which is 360 degrees. Each of those degrees can be divided into 60 smaller units called "minutes", which is a bit confusing because we think of "minutes" as a measurement of time as well. Each of these latitude minutes is a nautical mile. Each minute can also be divided into 60 smaller units, which are called, you guessed it, "seconds". When we read coordinates, such as this one: 79°24'58"W, we say "79 degrees, 24 minutes, 58 seconds".

You can view a video that does a far better job of explaining it here: The Nautical Mile Explained.

HOW THE CHALLENGE WORKS:

1) Read the six different expedition options below and decide how far you want to challenge yourself to run/walk in total from March 1 to March 31st, 2021. That's right, you have the entire month of March to cover this distance.

2) Register for the voyage of your choice. Don't forget to write down your "Confirmation Number", which will also be emailed to you. You can access your "Participant Dashboard" by clicking on the link in your confirmation email.

3) Wait patiently for your race kit to arrive in the mail (click on "Race Kit" in the page menu for more info). Our goal is to get you your race kit BEFORE March 1st. We are planning on mailing out the kits on February 15, to those that register by that date. If you register late, you probably won't get your race kit before the challenge starts but that isn't a problem. We will do our best to get it to you as soon as we can and you can still post and track your run/walk data.

4) On March 1, start running/walking towards your goal. You can use whatever platform you wish to track your data. If you use a treadmill, just take a photo of the data at the end of your workout. You will have access to our results page where you can add your run information and even include a screenshot, if you want to. Please note, in order to be eligible for 'Top 3 Prizing' in each race distance and gender category, you will need to have access to all of your run data for the month so that we can verify the information provided.

5) Our tracking page will keep track of how far you've travelled, how far you have left, and other useful information. Continue to run and track your distance for the entire month of March or until you've completed your expedition.

6) You can also join our Facebook Group and stay in touch with your fellow participants, share photos of you runs, and encourage one another.

7) Wear your race bib on your final run of the challenge and take a picture for our gallery (optional).

There is no denying that the Great Lakes (Lake Erie, Lake Ontario, Lake Huron, Lake Michigan, and Lake Superior) are a crucial part of Canadian geography. But it actually goes far beyond geography. The Great Lakes have played a major role in the development of Canada as a country and, therefore, is a big part of our Canadian identity. In terms of surface area, the Great Lakes is the largest group of fresh water lakes in the world.

But wait, there's more! Did you know that there are over 6,000 shipwrecks that have occurred in the Great Lakes, which have claimed over 30,000 lives? Many of these have been found to be in excellent condition, since the fresh water deteriorates the vessels at a much slower rate. There are also hundred of lighthouses that are scattered along the shorelines of these lakes, that helped guide the ships and provide safe passage.

There were also pirates. Plenty of them. Roaring Dan Seavey, James J. Strong, and Calico Jack are a few of the notorious Great Lakes Pirates. They usually weren't searching for gold but rather they stole beaver pelts, timber, and occasionally, entire ships. They also were known to bootleg alcohol and run floating brothels. These pirates didn't dress like typical ocean pirates either. They were known to wear wool toques, mittens, pullover sweaters, and sometimes even turtlenecks. The pirates were crafty and would sometime build fires on the shore to appear like a lighthouse and purposely lead ships to crash on rocks. The pirates would then board the ships and steal their goods.

Here are the voyage options (click on the voyage to learn more about it):

Lake Erie was created from a moving glacier about 4,000 years ago. It was named after the Iroquoian word erielhonan, which means "long tail" due to the fact that it is shaped like, well, a long tail. This lake is quite unique and unlike the other Great Lakes in a lot of ways. Although it is the second smallest of the Great Lakes in terms of surface area, in terms of water volume, it is the smallest.

Lake Erie is 388km long and 92km wide, which is why we are challenging you to run 92km (50 nautical miles) during March, which is an average of 3km per day.

Lake Ontario is NOT named after the province Ontario. In fact, it's the other way around. This lake has been home to the Iroquois for thousands of years. This lake is the smallest in terms of surface area but not in terms of volume. It actually hold about 4 times as much water as Lake Erie. More than 1/4 of Canada's population live within the Lake Ontario watershed, which provides drinking water for over 9 million people.

There have been about 50 people that have swum across Lake Ontario, which is 311km long and 85km across. For this month, if you choose the voyage, you will be challenged to run across Lake Ontario AND THEN BACK! This will be a total of 170km (92 nautical miles), which is an average of about 5.5km per day for the duration of the month. 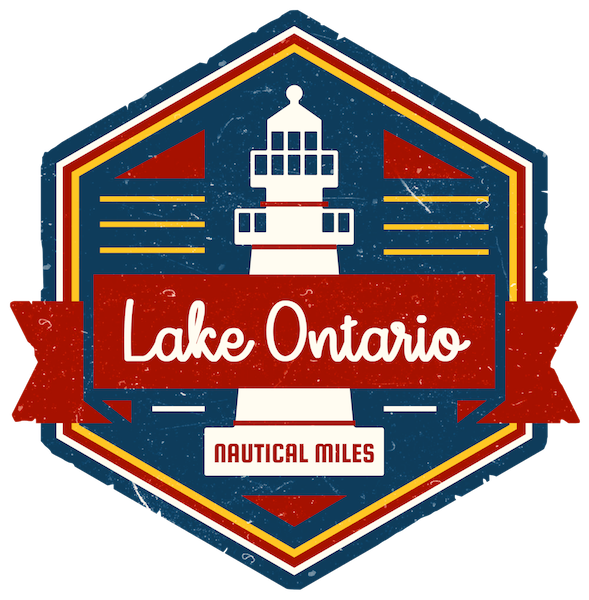 Lake Huron is the 2nd largest lake by surface area and the 3rd largest by volume. When factoring in all of the 30,000 islands in this lake, it has the longest shoreline of any of the Great Lakes. According to Ojibwe legend, there is a water monster named Mishebeshu (great lynx) that is said to have an underwater den in the lake.

Lake Huron is 332km and 295km across. If you participate in this voyage, you will be challenged to run 295km (159 nautical miles) across the lake. That is an average of approximately 9.5km per day for the entire month. 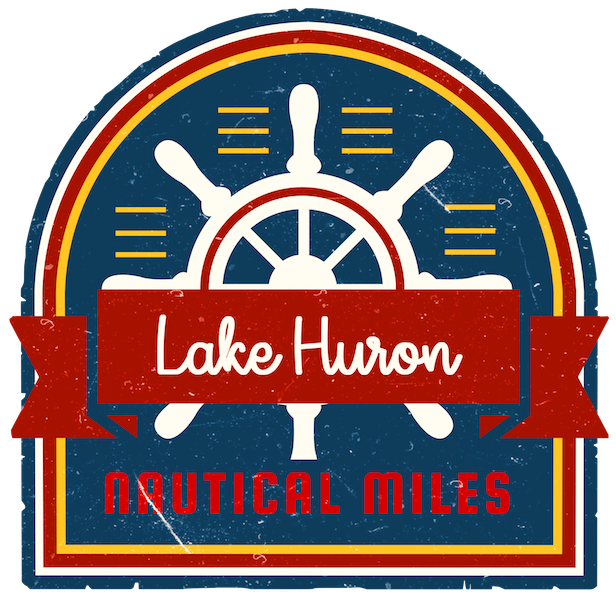 Lake Michigan is the 3rd largest of the Great Lakes by surface area but the 2nd largest by water volume. It is the only Great Lake that is completely bordered by the United States of America. About 12 million people live along the shores of this lake.

Lake Michigan is 494km long and 190km across. If you choose this voyage, you will be challenged to run 380km (205 nautical miles) over the course of the month- the distance across the lake and then back again. That is an average of over 12km/day for the entire month. 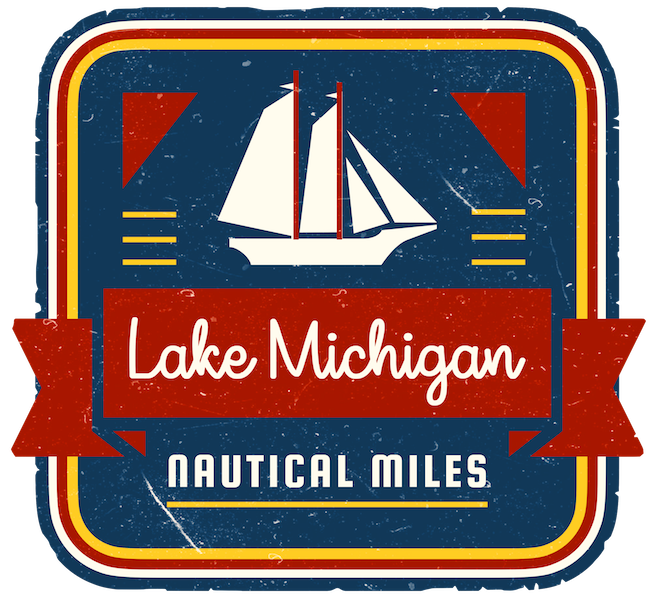 Lake Superior is the largest of the Great Lakes- both in surface area and volume. In fact, all of the other lakes could easily fit inside Lake Superior. It is also the deepest of the 5 Great Lakes with a maximum depth of 406m/1,333 feet. In terms of surface volume, it is actually the largest lake in the world. There is enough water in this lake to cover all of North America AND South America with 1 foot of water. This lake is so large that it actually has its own tide! Lake Superior contains 10% of the world's fresh surface water.

Lake Superior is 257km across and a whopping 560km (302 nautical miles) long, which is the exact distance that you will be challenged to run if you sign up for this voyage. That is approximately 18km every day for the entire month. Are you up for the challenge? 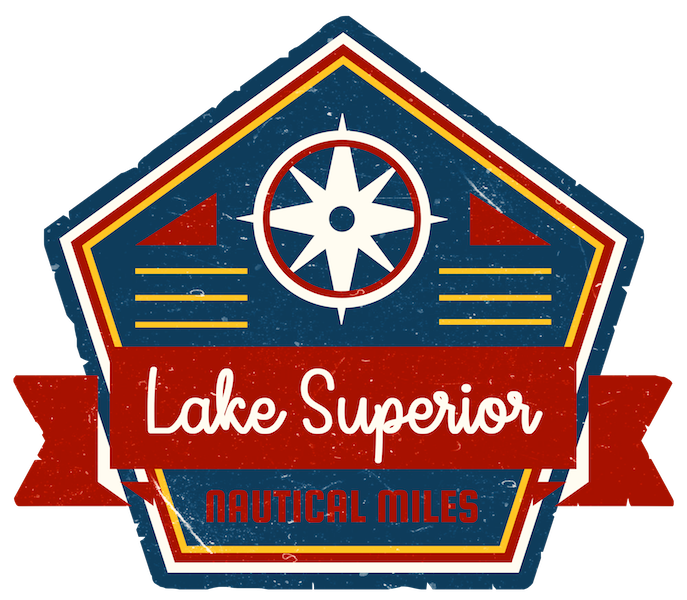 TO LEVEL THE PLAYING FIELD

We are hoping to reach runners from across North America and even beyond. Some participants could be running amongst the Rocky Mountains or on the Appalachian Trail. Some may be conquering 14'ers in the thin air of Colorado. Others may be running along the Seawall in Vancouver or along the scenic Queen's Quay Waterfront Trail in Toronto. Some may take in the ocean views along the rolling hills of the East Coast. We want you to run where you love to run rather than just focusing on covering the distance. To do this, we have created a system to help account for the added difficulty of running routes with significant elevation gain.

We have scoured the internet to determine how elevation gain can be converted into distance travelled (in terms of effort expenditure). It turns out that there isn't an exact formula since there are simply too many factors at play, however, we have settled on the following:

If you don't want to keep track of your elevation gain, then don't. No problem. It's not mandatory but rather an option for those of you who live in a hilly region.

Please click on"Elevation Compensation" in the menu at the top left of this page for more information on this. Don't worry, the tracking couldn't be easier!

We have a really cool race kit fo this event and we are going to mail it right to you! This is our biggest race kit yet!

Here are some of the race kit contentsL

- A second race medal that doubles as a drink coaster. Each voyage will have a different coaster medal.

To view a video of the race kit, click here.

You can also click on the "Race Kit" tab at the top of the page to view the different race medals. 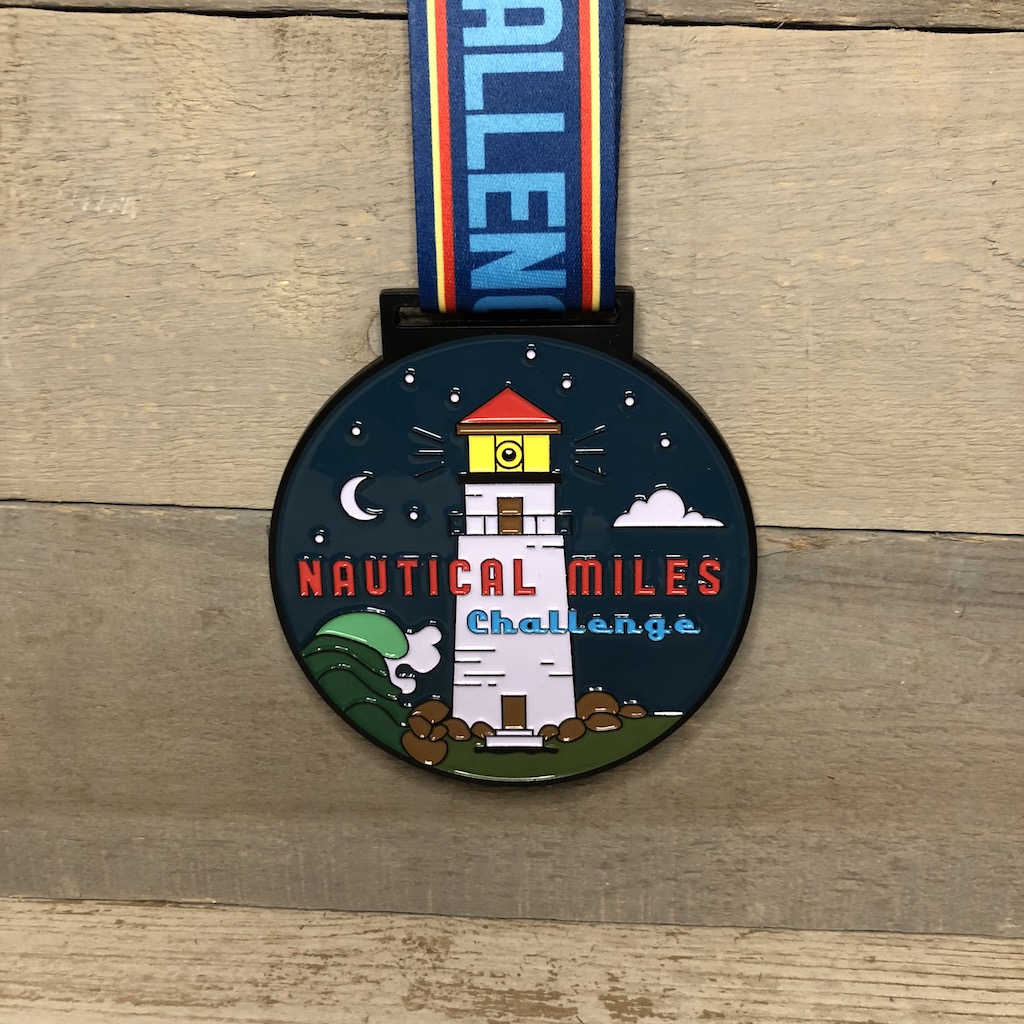 up with our friends at Merrell Canada for this event. They will be providing prizes for the top 3 Women/Men/Non-Binary in each of the 5 Voyages.

We will also be giving out some great prizes along the way for various contests throughout the month.