Needless to say that was pretty lame, but thanks so much again to everyone who donated and showed support x

Just wanted to say a massive thanks for the insane amount of support. We recently got an email saying that the deadline for the virtual Half-Marathon has been extended to October 31st, and given the physical restraints that recovery has put on training, this will be the new date me and Kim will be running.

Back in October 2020, at the age of 29, I was diagnosed with Stage 4 Cancer of the appendix (or a Malignant Appendiceal Mucinous Neoplasm, to get fancy), discovered after the tumor burst and sent me to the ER. Come January, and thanks to the oncologists at Vancouver General Hospital and a couple operations - with the latter being Cytoreductive Surgery with HIPEC as chemo (Google Image it for fun) - I'm now in full remission, and my body looks far more interesting than it did before: 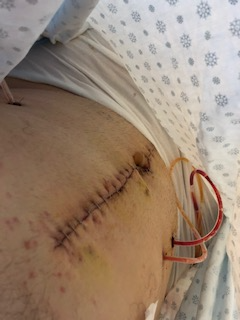 I'm currently in the late stages of healing, and with the help of my awesome wife Kim, we figured whilst running away from responsibility and trauma we might as well try and raise some money for BC Cancer Foundation. The goal is 21KM on October 10th, and whether this’ll be done through a run or a desperate hobble full of regret is yet to be seen.

If you have any dollar to spare, it will be going to Canada’s BC Cancer Foundation, where people far less lazy than us are coming up with all kinds of clever treatments. You can read more aboot them here: