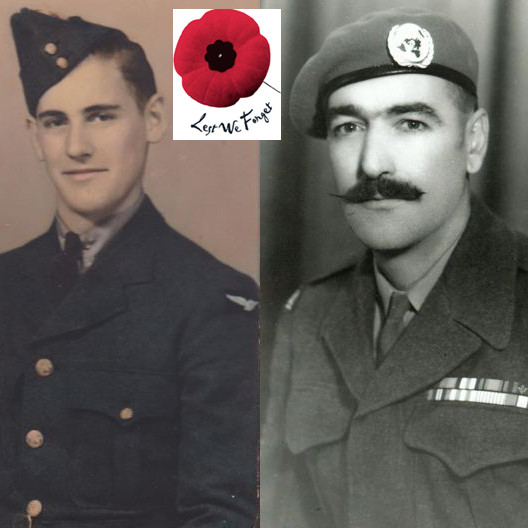 “The living owe it to those who no longer can speak to tell their story for them.”

That quote expresses why I am registered for the Juno Beach Centre Remembrance Day walk.  .  My family and friends, the main reason for participating in this event is to honour the memory of my late father MWO Ray Fournier (WWII, Korean War, Peacekeeping in Egypt, and Cyprus) and my uncle, Sgt Tail Gunner Roger Fournier (RCAF 429 Bison Squadron), who was shot down over Belgium on the 22nd of October 1943 at the age of 20.  The walk will be a 21.1 km (half-marathon) and I have chosen the date of 22 October, which was the date in October 1943 that Uncle Roger’s bomber, Halifax JD363, left the airstrip in Leeming, England, on only their 2nd mission, never to return.

The walk is a fund raising event for the Juno Beach Centre located on the beaches of Normandy.  It was opened in 2003 by veterans and volunteers with a vision to create a permanent memorial to all Canadians who served during the Second World War.  The Centre pays homage to the 45,000 Canadians who lost their lives during the War.  The Centre’s mandate is to preserve this legacy for future generations through education and remembrance.  Help me raise funds today so we can teach tomorrow's generations about the men and women who stepped up to fight for a better world.

For those of you who know me, I am a passionate student of Canadian Military history and have been researching and reading about Canadians who participated in both WWI and WWII for years.  In addition to honouring the memory of my father and uncle, I also want to honour and bring attention to the memory of another 3 Canadians that I have met or read about and was struck by their stories.

The late Flying Officer Jim Moffat was with RCAF 427 Lion Squadron during WWII.  Jim grew up in the Timmins area and was one of my uncle Roger’s best friends.  Flying their 13th mission, his bomber collided with another bomber and crashed behind enemy lines.  He was the only survivor, living and fighting with the resistance forces (the French Maquis – Randolet Group) until he was able to return to Canada after the Liberation.  I met Jim on a number of occasions and I felt privileged and honoured to have known Jim and heard his stories.

There are two other Canadian soldiers from WWI whose stories struck a cord with me and whose memories I want to honour as well.  They are Canadian heroes who’s names may not be as familiar as they should be, but their stories and lives should be remembered and honoured along with other more famous names.  Their stories are well worth reading about.

The story of Lieutenant Colonel Samuel Sharpe DSO MP, a native of Uxbridge Ontario and an elected member of parliament.  As a sitting member of parliament, LCol Sharpe joined in the Canadian Expeditionary Force and promptly recruited and raised the 116th Battalion (Ontario County) which he commanded at Vimy Ridge, Avion and Passchendaele.   He was awarded the Distinguished Service Order medal.   His story resonates even mored today as we have come to learn more about PTSD.

The story of Francis Pegahmagabow MM & two bars was a Canadian First Nations soldier, politician and activist. He was the most highly decorated Indigenous soldier in Canadian military history and the most effective sniper of the First World War. Three times awarded the Military Medal and seriously wounded, he was an expert marksman and scout. Later in life, he served as chief and a councillor for the Wasauksing First Nation, and as an activist and leader in several First Nations organizations. Another interesting story very relevant to what is currently happening in Canada today.

My goal is to continue to learn about Canadians who served their country and keep their memories alive by sharing their stories with anyone who will listen.