There are a few things that almost everyone knows about pyramids: they're old (like some of us), they're really strong (like some of you), and, of course, that to find the volume of a pyramid one must simply apply the following formula : 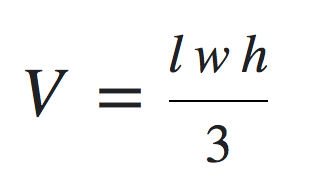 First, a little information on the pyramids that we're talking about. The Giza Necropolis in Greater Cairo, Egypt is the site of a grouping of pyramids, as well as the Great Sphinx of Giza. All of these were built around 4,500 years ago and are the largest pyramids built in Ancient Egypt. The Great Pyramid of Giza is one of the Seven Wonders of the World. It is the oldest of all of the ancient wonders and the only one that still exists to this day. 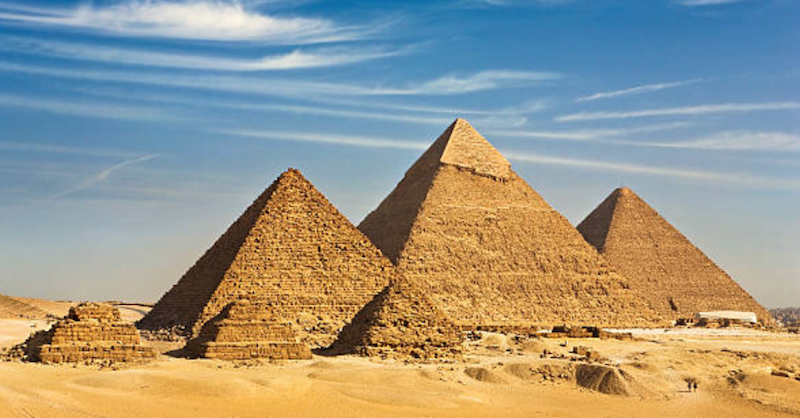 The purpose of the pyramids was to house the remains of the dead pharaohs that ruled at the time. They also stored some of the important items that they would need to rule in the afterlife.

The construction of these massive structures would be difficult today, even with the use of modern equipment. It is amazing that these were built thousands of years ago and the exact method used to build them is still uncertain. Although it is only speculation, it is believed that the construction of the pyramids may have taken 400,000 workers 20 years to build.

To add to the impressiveness of these pyramids, it should be noted that the 4 sides to each of the pyramids were almost perfectly astronomically oriented to the north-south and east-west. Pretty amazing!

How This Challenge Works:

1) Read the four different challenge options below and decide how far you want to challenge yourself to run/walk in total from February 1- February 28, 2021. However, in addition to the total distance, you should also have a close look at how far you will have to run each day since the layout of this challenge means that the middle of the month is much more difficult than the beginning or the end.

*The daily distance CAN be split into multiple runs/walks, as long as you complete the total distance by midnight.

2) Register for the challenge of your choice. Don't forget to write down your "Confirmation Number", which will also be emailed to you. You can access your "Participant Dashboard" by clicking on the link in your confirmation email.

3) Wait patiently for your race kit to arrive in the mail. For this event, we are actually hoping to send you the race kit BEFORE the event starts, which is why registration is closing at the end of December. We have a REALLY cool race medal design for this event and we CAN'T WAIT to reveal it to you!

4) On February 1st, start running/walking the minimum distance that is on the schedule for the challenge you signed up for. You are welcome to run more than the minimum distance but you also might want to consider saving your legs for the challenging weeks ahead. This challenge eases you into the longer distances. You can use whatever platform you wish to track your data. You will receive a handy schedule for you to track your runs with.

5) You can also join our Facebook Group and stay in touch with your fellow participants, share photos of you runs, and encourage one another. We'll send you this information in the pre-race email.

6) Participate in the additional challenges along the way and you just may win some of the prizes we are giving out!

There are two things that make this challenge difficult:

1) You will need to run/walk nearly every day for the entire month of February. At least we picked the shortest month. Check out "What Happens if I Miss a Day?" at the bottom of this page if you are worried about this.

2) The way that the daily distances are 'stacked' resembles that of a pyramid or multiple pyramids. The month will start with the shortest run/walk and gradually increase to the peak of the pyramid and then will decrease back down to the starting point.

Here are the four challenge options:

1) The Pyramids of Queens: There are 3 smaller pyramids that are located adjacent to Khufu's pyramid. These 3 pyramids are full of mystery since it is uncertain who they were built for, though it is believed that they were built for different Queens and perhaps the pharaoh's mother.

2) The Pyramid of Menkaure: With a height of 65m, it is a large pyramid, though smaller than that of Khafre and Khufu. It is uncertain as to why Menkaure's pyramid was built smaller than the other pharaohs' pyramids- perhaps they were running out of space or perhaps he wasn't viewed as favourably as the others.

3) The Pyramid of Khafre: Khafre was one of Khufu's successors and although he had his pyramid built slightly smaller than that of Khufu, it was built on higher ground, to appear larger than it is.

This challenge has a starting point of 6km on the first day and reaches the peak at 19km. This will certainly be a challenge for even seasoned runners as the middle portion of this option will throw a lot of high volume days in a row at the participants. However, just as the distance slowly increased, after the mid-way point, it will start to taper off again. The total distance for this challenge is 350km for the month.

4) The Pyramid of Khufu: Also known as "The Great Pyramid" or "The Pyramid of Giza", this was the original pyramid and the largest. In fact for almost 4,000 years it was the tallest building on Earth. It originally rose 146m, about the height of a modern 30-story building.

This challenge is certainly not for everyone. Participants will jump right into some significant distances and will have a long stretch where they will need to run between 20-25km per day. In the winter. Hopefully you've got a warm toque! The total distance for this challenge is 518km for the month.

What Happens if I Miss a Day?

It wouldn't be very cool of us to expect you to run for 28 days straight without missing a day. Things happen, right? You may have other commitments, an emergency of some type, a minor injury, or you may just feel like you need a rest day. We strongly encourage you to listen to your body; staying healthy is far more important than completing this, or any, challenge.

Here's the deal, if you need to take a day or two (or three, maybe four) off, do it. BUT, you must complete at least 90% of the total monthly distance. Also, try not to miss the peak distance days. If something happens and you need more than a couple of days off or need to miss a peak day (we are in the middle of a pandemic after all), reach out to us and we will deal with these situations on an individual basis.

It goes with out saying that, ideally, the goal is to try to complete every run/walk on the schedule.

The race kit will be mailed directly to you so please make sure that the address that you use to register is your correct mailing address. If your address is saved in your Race Roster account, verify that it is correct before completing your registration. 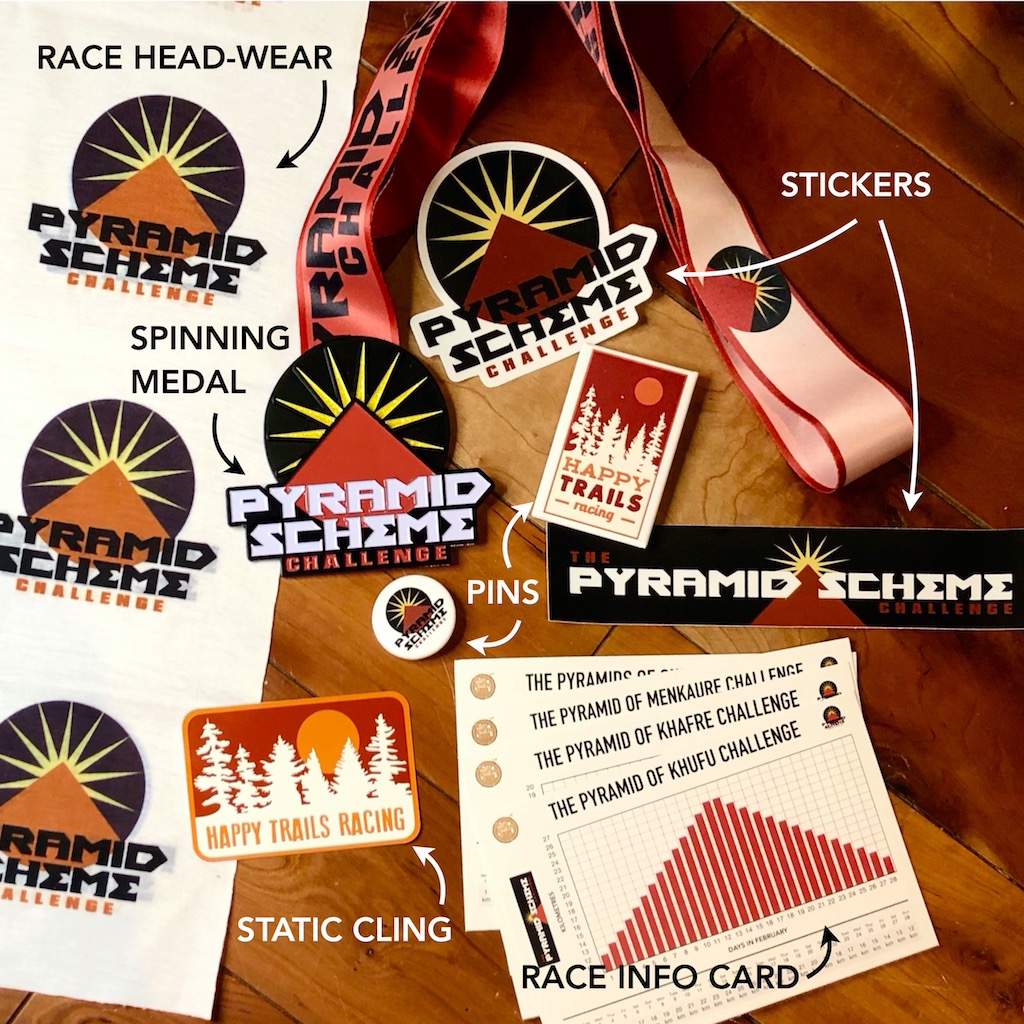 Due to the nature of this event, there won't be prizing for the top 3 runners in each event (since all of the participants will be finishing the challenge on the same day). However, that certainly doesn't mean that we won't be giving away prizes- we love giving out prizes!

We will be having a number of special challenges along the way and will also be doing some draws. We've got a lot of great stuff that we are excited to give out.